China FVF 2013 was held from Nov. 28th to 30th at Beijing Exhibition Center, China. The convention+conference are co-organized by China Entry-Exit Inspection and Quarantine Association (CIQA) and China Fruit Marketing Association, and managed by China Great Wall International Exhibition Co. Ltd. This year, China FVF has received abundant positive feedbacks from both exhibitors and visitors. After several years, China FVF has achieved great progress in terms of produce trade, information exchange, new products exhibition. It has grown into the most influential comprehensive trade show in the produce industry in China. 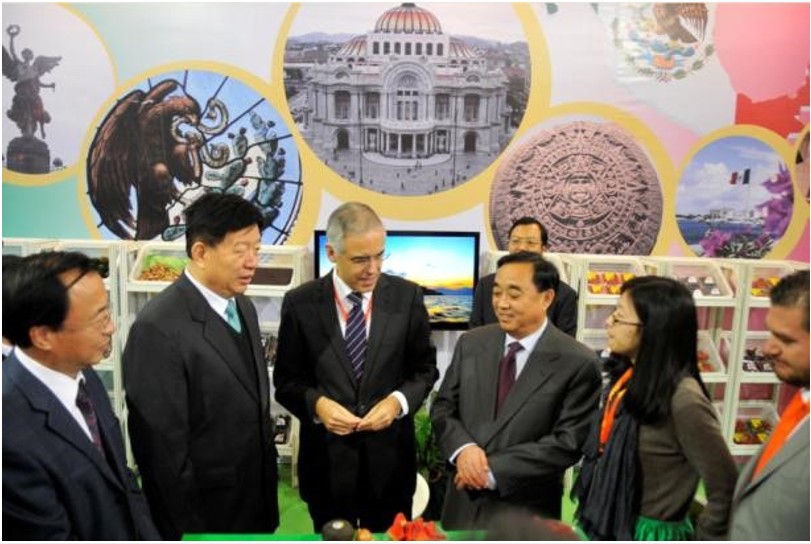 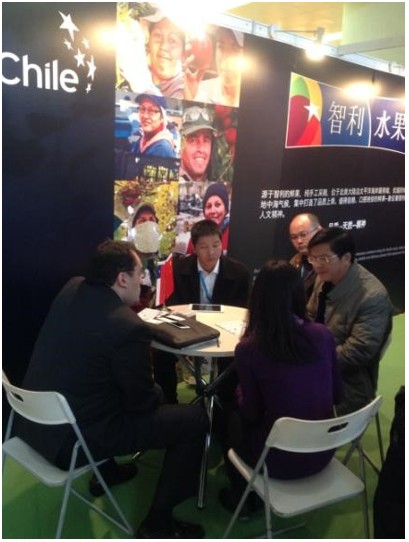 Twenty two percent of all exhibitors are international exhibitors but they took up half of the exhibiting space. Imported fruit has become the #1 highlight on the show floor. Some international exhibitors shared booths and attended as associational and national pavilions. However, more and more independent exhibitors ordered their own booths and started marketing their own brands and products. China FVF 2013 saw a dramatic increase in the categories and samples of imported fruits: Thailand has brought grapefruit, dragon fruit and other unique products; Australia pavilion exhibited cherry, avocado, table grape, peach, lynchi, apple, pear and citrus; Mexico brought blueberry, raspberry, blackberry and strawberry to Beijing; Chile has exhibited grape, avocado, blueberry and cherry. Tropical fruits attracted people's eyes as well: banana, yellow dragon fruit and mango from Ecuador, durian, jackfruit and pineapple from Malaysia, and sakiya from Taiwan. Citrus from Spain and South Africa attracted visitors with their juicy and bright appearance. Peru pavilion was a first year exhibitor. They have brought avocado, blueberry and grape to Beijing. Even on the last day, some booths were still packed with visitors. All international exhibitors were impressed by the strong purchasing power from the China market and consumers. Most visitors asked them, "Do you have importers and agents in China?" "Where can we find your products?" 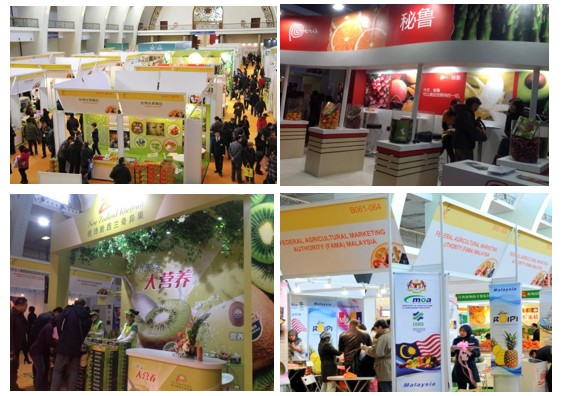 International exhibitors said that China FVF 2013 had created business opportunity both for them and their agents. What surprised them was Chinese consumers were interested in every type of imported fruit. They were very surprised to find out even avocado, which is not common in the Chinese cuisine, was very popular in China. China FVF was a great experience for them and very enlightening in the following points:

(1) China market has great potential and its purchasing power is growing in a tremendous speed;

(2) As for household fruit, like apple, pear, grape, and citrus, Chinese consumers are looking for varieties in taste and origin;

(3) The demand for berries and cherries are increasing in a double digit speed;

(5) Traditionally, Chinese pays attention to nutrition. Nutrition facts and fruit recipes are good marketing niches. Avocado's success in China is a case story. International exhibitors commented that China FVF has grown into a key window for them to understand the China market and produce industry. During the 2013 trade show, they had the chance to know some unique business models in China, including fruit chain store, e-commerce and whole sale produce market. When the trade show admitted general public visitors in the last day, they saw a special marketing potential for them. Most international exhibitors said they would attend the 2014 show and should bring more samples next year. They would also like to invite their import/export agents coming with them. Some marketing strategies targeted at the general public would be necessary to promote their products. 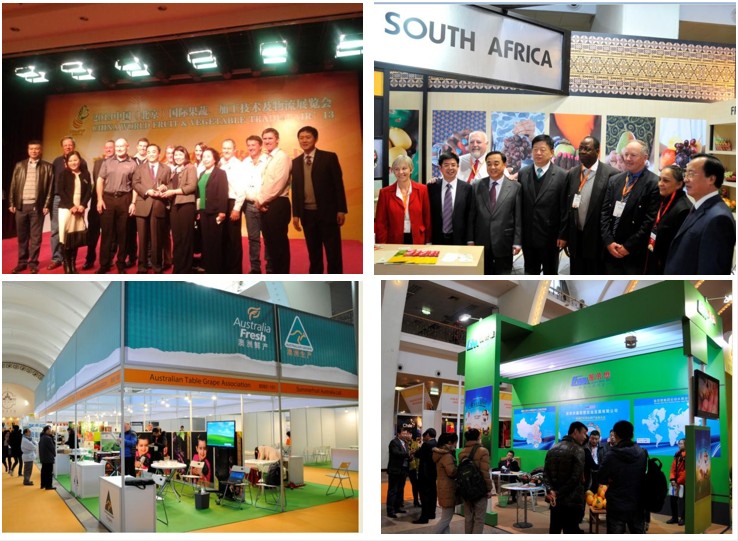 Domestic exhibitors from 19 provinces, regions and cities attended China FVF 2013, including Beijing, Chongqing, Guangdong, Guangxi, Hebei, Henan, Hunan, Jiangxi, Jiangsu, Liaoning, Shandong, Shanxi, Shaanxi, Shanghai, Taiwan, Tianjin, Xinjiang, Yunnan, and Zhejiang. Compared with previous years, the quantity and quality of domestic products has increased as well. The harvesting seasons for apple and citrus in China just ended. Visitors had seen more varieties of apple and citrus on the show floor. China FVF is not only a trade event, but also a big gathering-together for growers and researchers to share the latest innovations in the industry.

The following is an analysis of exhibitors: 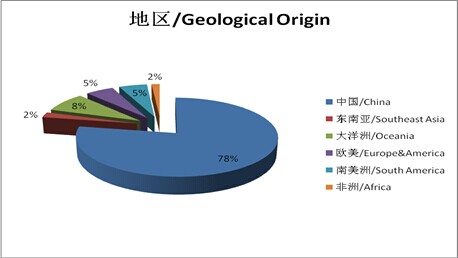 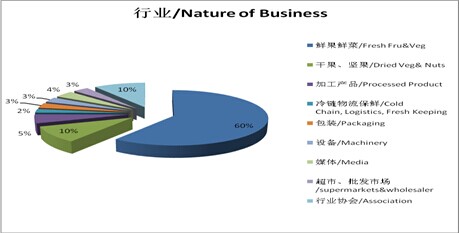 In two and a half days, nearly 3,000 professional visitors and over 30,000 public attendees visited China FVF 2013. The strong purchasing power reflected both by the professional buyers and general public is another highlight of the trade show. Domestic buyers basically covered the whole country. The convention+confernce have attracted buyers from importers/exporters, wholesale distributors, chains, supermarkets, e-commerce, catering and other professional buyers. Thirty five percent exhibitors have signed trade contracts on site, and over 85% have reached verbal purchasing intents. Several popular pavilions were too busy receiving visitors for a break. Ninety percent of buyers are satisfied with this exhibition. They found more providers, more products and more samples on the 2013 show floor. Domestic buyers also said that as China FVF keeps on growing, more and more "foreign fruits" growers directly exhibit their products in China and they can make purchasing decision without travelling outside of China. Buyers are also satisfied that they could see samples of those products under import negations with China. This information gives them one step ahead in the competitive market. When a certain product is about to sign the permit in China, they can directly import the products from the growers/traders they met during China FVF. 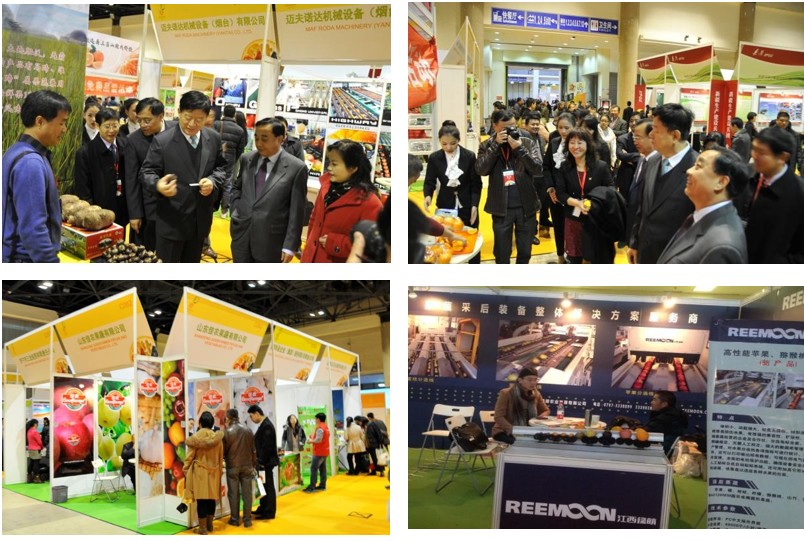 The following is an analysis of professional visitors: 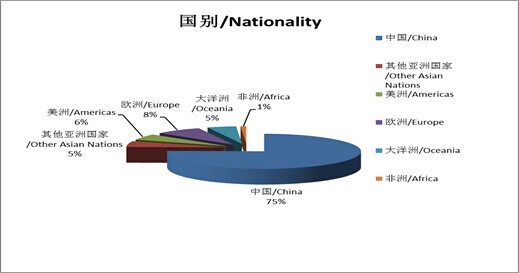 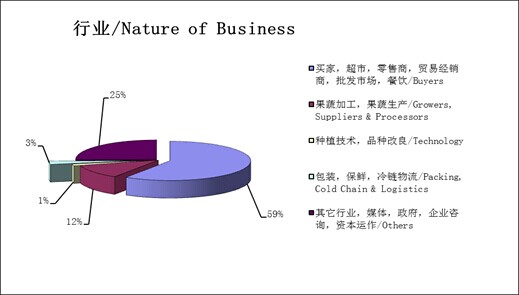 With the focus on China, the strongest potential produce market in the world, China FVF has attracted attention from both business people and government officials. Ambassadors and counselors from Australia, Canada, Chile, Costa Rica, Egypt, Ecuador, Greece, Israel, Malaysia, Mexico, New Zealand, Pakistan, Peru, and South Africa attended the opening ceremony and conferences. They commented that the overall quality of China FVF has seen big improvement in 2013.

China FVF offers a stage for information exchange for the industry. "Fresh Forum" is a one day conference, covering three themes: Produce Inspection & Quarantine Policy, Produce Standardization & Certification, and International Produce Trade. Keynote speakers are from China, Peru, South Africa, Australia, Chile, and Mexico. They are government officials, business executives and association managers. They have brought large amount of information to the audience. In 2013, China FVF continued to hold "Chain Retailer & E-Commerce Executive Summit". "Executive Summit" is not only welcomed by the industry, but also was popular with overseas guests. International guests said that the model of selling to importers or agents is declining. In international produce trade, production-sales integration is becoming increasingly visible. As growers, they also need to understand the market sales channels, especially for China,a market with great potential and unique. China FVF has provided a platform and opportunity to understand the market, which is not available in the other exhibition. China FVF "B2B Matching Meeting" also provided an effective and direct opportunity for buyers and sellers to sit down and sign deals. Fruit Cuisine Shows, Product Promotion Events and field trips also created great business opportunities. 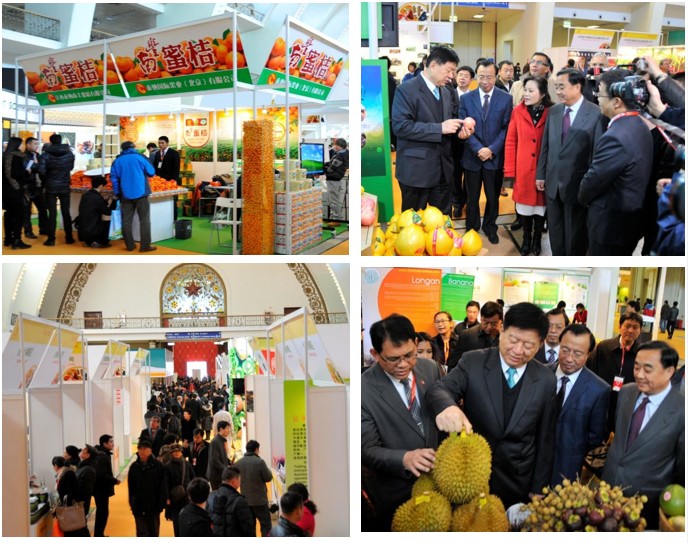 China FVF is the only comprehensive produce industry convention+conference in China. It is the first choice for international exhibitors to land on the huge fast growing produce market in the world. In 2014, China FVF will be held from November 14 to 16 in Beijing at China National Conference Center. This is a great opportunity international visitors must grasp.